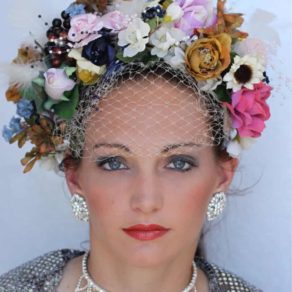 Coronado resident Marilyn Feldman is a retired social worker who is also a professionally trained couture milliner. She will bring an array of hats, ranging from fascinators to cocktail party hats, fashion hats, soft brim hats and costume hats that cover every occasion; she’ll even have a collection of hats that are perfect for Coronado’s Independence Day celebration. “People want hats for weddings, showers, fancy events and, of course, opening day at the Del Mar racetrack,” says Feldman. And, each hat is totally unique!”

Education & Learning
The Navy Environmental Restoration Program will be on site to inform the community about the Navy’s cleanup program and environmental stewardship efforts.  Invitations will be extended to members of the public for free tours of some of the environmental sites at Naval Air Station North Island in June. 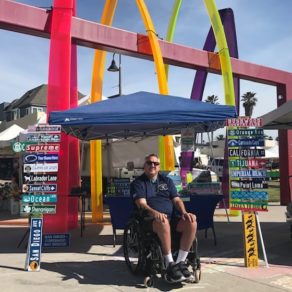 Stefan Freeman has been attending the Coronado Flower Show for 14 years and this is his first year as a vendor. His company, Coronado Sign, specializes in personalized “streets signs” that can be ordered in any color. In Coronado, those signs, handmade from metal with computer-generated graphics, include an insignia, such as a crown similar to but not identical to the official city seal, or other symbols, such as an “Islander” tiki. Freeman creates the signs from his garage and the popularity of his product has allowed him to expand to Imperial Beach, Chula Vista and San Diego. Most remarkable about his business success is that Freeman is a quadriplegic, the result of a diving accident in 1997. Freeman and his wife, Justine, a Coronado native, moved here from Orange County with their two children in 2012. 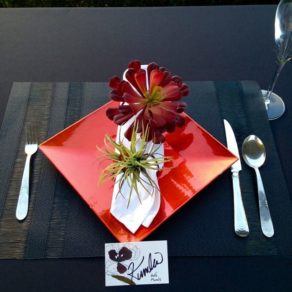 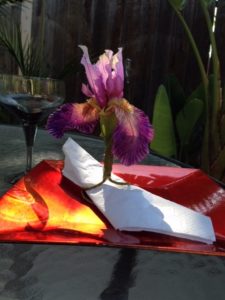 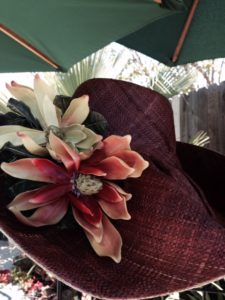 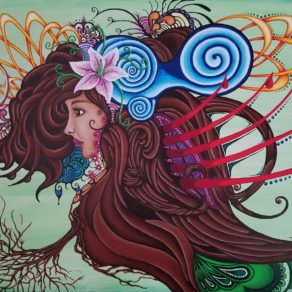 Chula Vista-based fine artist Amanda Baris paints in acrylic, pulling from nature for inspiration. A graduate of the Art Institute of Portland, she comes from a family of artists. “I’ve been painting since I was five years old,” says Baris. “My art is a mix of contemporary art and surrealism; it’s an expression of how I view the world through Mother Nature.” The Coronado Flower Show is her first art exhibition and she is about to launch a website. 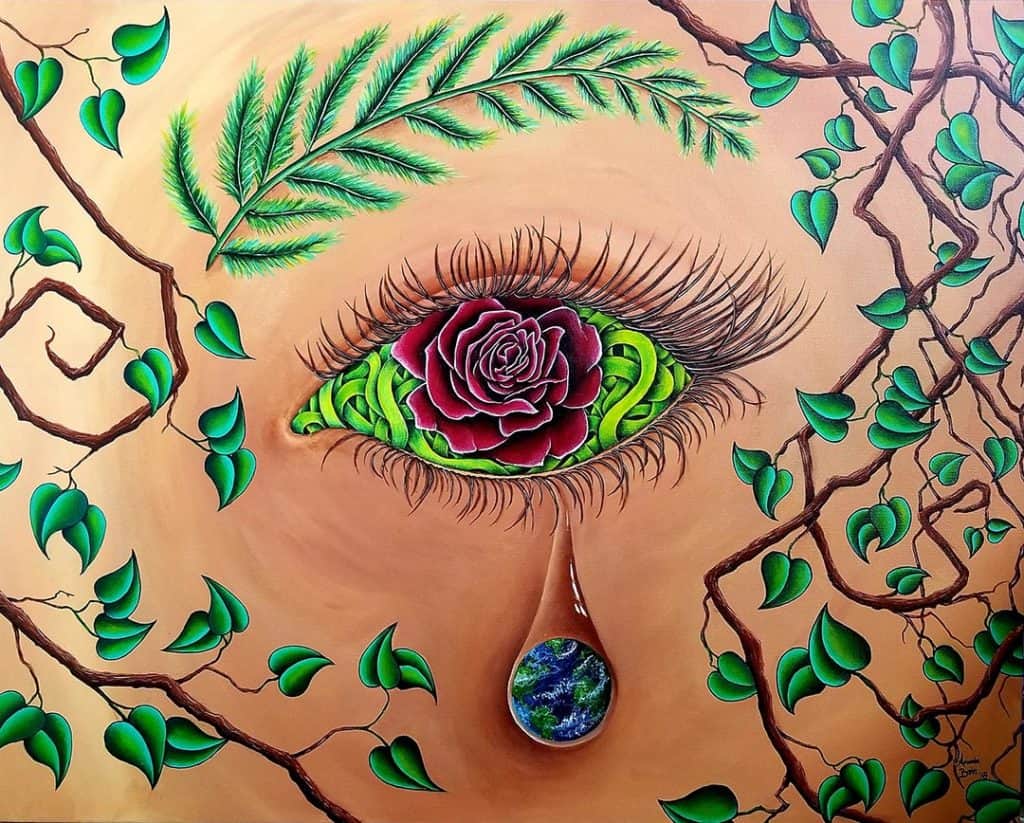 The mother-daughter team of Mary Lynn and Amy Dominguez are back at this year’s flower show with their colorful and creative handmade purses, many of which feature floral motifs, many of which can be viewed on the crafty website, etsy. Mary Lynn majored in drawing and minored in design at Otis Art Institute in Los Angeles where her medium of choice was fabric. Although she launched a career as a public artist in Southern California, working mostly with mosaic on exterior projects, and using many other kinds of media for interior spaces, fabric remained close to her heart. Daughter Amy joined her as studio assistant on many projects and watched as her mom’s fabric collection grew, and grew and GREW! But when MaryLynn kept buying fabric, Amy suggested they launch a handbag line. Today, says Mary Lynn, “Even though we each have our own studio, we have the most fun when we meet up to tweak our designs, choose fabric combinations, and make the one-of-a-kind beads that go on our handbags.” 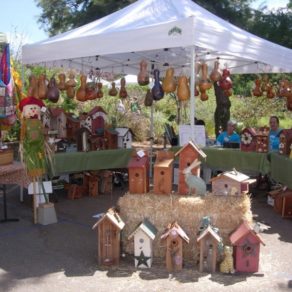 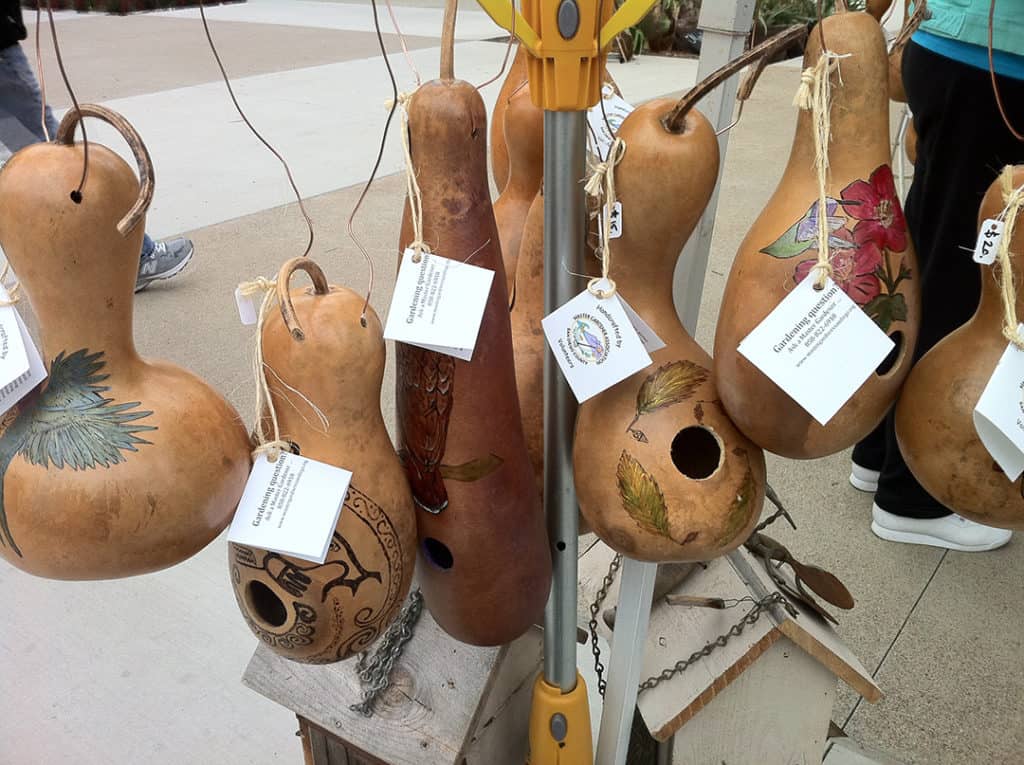 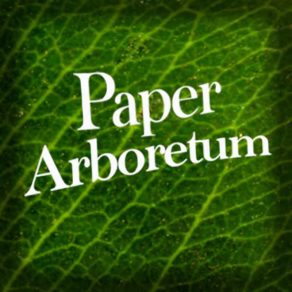 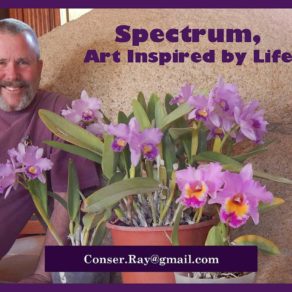 Ray Conser is a master gardener whose describes his artwork as “inspired by life, people and events expressed in multiple media.” Included in his works are “gourd sculptures” featuring gourds that are carved, burned and/or painted and incorporate basketry, and inlaid glass. He additionally works in pastels, watercolor and photography. 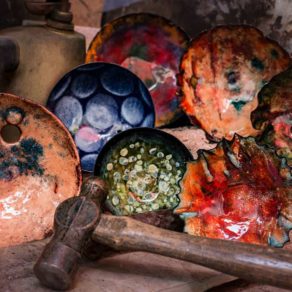 Bowls by Mike & Me

Fellow artists Mike Leamons and Suzie Sterling craft distinctive bowls out of copper, which is hand-hammered and then enameled. This year, they’ll also bring copper and wood flower stands to the show. Says Sterling: “Enameling is an ancient art form, similar to Chinese cloisonné, in which we take a powdered glass and bake it in a kiln at 1,500 degrees. We never know what we’re going to get.” The artists have been creating their enameled bowls for five years from their La Mesa studio and have each worked for more than 20 years in copper. Both artists will be at the flower show.